“You can have any colour, as long as it’s black.”

Can you remember the colours of the four Teletubbies? (There were four wasn’t there?) How about the shirt colour of Woody from Toy Story?

That’s the core concept for Colourbrain (or Colorbrain as our letter-efficient transatlantic cousins call it) from Big Potato Games, where Players compete individually, or in teams to recall the colours of things – well-known brands, film & TV characters and other commonplace objects in the hope of being the first to reach 10 points.

As board game rulesets go, it’s wonderfully uncomplicated, and totally inclusive for kids and adults alike, that is until you get questions that require a certain cultural, historic or geographic knowledge.

Apart from a few very subtle tweaks across the editions, all follow the same ruleset: read a card out aloud to all teams; each team determines what colour or colours to answer using 11 differently coloured cards before the correct answer is revealed; and points (or groans) allocated.

First to ten points is declared the winner. Super simples.

Although, each team also possess a Colour Capture Card that allows them once per game to temporarily steal at the eleventh hour several colours at random from an opposing player/team’s colour palette before they answer the next question, thus hamstringing their likelihood of correctly answering.

Regrettably, the colour cards are returned to the team in time for the next question, so it serves only as a temporary delaying tactic. 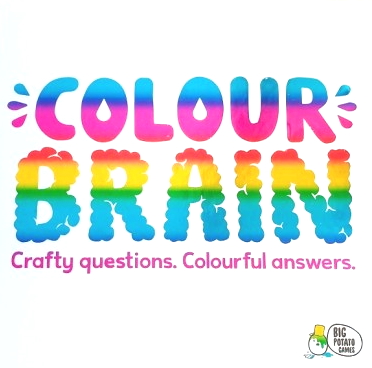 Of the four versions I’d not recommend the original for two reasons:
Despite being the edition with the most questions, the three subsequent editions usefully added the number of colours required for the answer on the question side, the original doesn’t have this.

So, if the question was “What colours are the Olympic rings?” the newer editions would tell you that you need to answer 5 colours, the older edition wouldn’t provide this useful clue. It’s a minor niggle but it’s a valued design addition to the sequels.

The second reason I would steer away from the original box is that of the 300 questions, I would expect only 60-70 that a 10 year might possibly know (literally just went through them all). Noted that the age on the box is 12+, and this is the rare case of a games publisher probably pitching it about right – although do be aware even 14 or 15 year olds won’t get a lot of the cultural, cinematic or musical references on the question cards.

If you’re planning on playing with younger pip-squeaks just be aware they won’t have a clue what the answer is for 75%-80% of the questions or understand the question – largely because a lot of the questions require some prior cultural, historic, geographic, musical or cinematic knowledge.
, so it’ll just be guesswork. so they’ll need to team up with an adult (appreciate that’s no guarantee that will help!) or you can skip the question card and pick another.
Admittedly some of the questions are deliberately guesswork and destined to gnaw away at you – “Cripes, what IS the colour of the entertainment wedge in the original Trivial Pursuit? Damn my failing memory..”

For all of the above reasons, unless you’re playing with adults or teaming younger players with adults my recommendation would be to go for the Junior or Disney versions – it’ll be more of a level playing field (or possibly weighted in their favour!).

Irrespective of which version you settle on, there really are minimal components which makes it perfect for holidays or when in transit (on rail, ferry or flight). To travel light, you could  do away with the box, pop a pile of question cards in an elastic band along with the colour cards and hey presto – low fi Colourbrain holiday version.

If I was going to be picky – once you start playing Colourbrain – it’s such an incredibly moreish game that it’s hard not to rattle through all the question card decks in a few sittings.  If you play frequently with the same group (ie your immediate family) this could well impact the longevity, but the same argument can be levelled at any trivia/question based game.

With 300 question cards in the base game it shouldn’t present too much of a problem, in theory it should only take 10-20 questions to elicit a winner. It’s just so darned compelling. I promise you, you’ll play several games back-to-back before you know it.

One of the less hectic family party games out there, and in these COVID dominated times, it’s great that it can easily be played remotely over video call (link to instruction tweaks below).

Fabulously moreish, unhectic party game, suitable for all ages. Simple to grasp and swift to get started.

As an Amazon Associate I earn from qualifying purchases, at no cost to you.  Learn More